We all like a powerful pc setup, and we can do it by using some best overclocking software. If you want to improve your PC’s performance without making any changes in the hardware, then you land on the right page for the solution. You might find it funny or false, but you can improve your pc at free of cost. How? The answer is, using CPU overclocking software. And today, I am here with the same topic. First, we brief you about Overclocking, followed by the list of the known names in the Overclocking industry. So let’s dive into it.

Here in this section, we have made a list of 10 best GPU overclocking software out of abundant names present on the internet. This free overclocking software will undoubtedly accelerate the speed of your windows pc once you start using it. And to pick one, you have to first look at the 10 best names. Let’s start.

The first and most known name in the list of best CPU overclocking software is MSI Afterburner. It allows you to complete control over your graphics card. You will get a complete overview of your system’s hardware altogether. It includes benchmarking, fan profile customization, etc.

You will find its interface is easy even if you are new for overclocking. This tool is free to use. Now push the performance of your hardware with MSI Afterburner. You will also get complete control over core memory accuracy. Even it also offers comprehensive system information and performance report.

Users can test the thermal performance and stability of the pc graphics cards. No matter what graphics card your system has, it supports all. It means it can make all most of the graphics on your pc.

It is a more popular tool in the gaming community. However, the maximum number of supported profiles is restricted to it. Yes, it supports the max 10 profiles of users. The major limit or disadvantage is it supports only Nvidia Graphic Cards. Other than this, it is the best software for overclocking. It works with user profile, fan speed voltage control, and few more things.

The Intel XTU is quite simple, and hence it is widely used by experts and beginners both. I can’t think better than this tool for my processor and hardware. From the name, you might get an idea that it supports next-generation Intel-Core processors. You can monitor and maximize your system and processor’s ability, analyze temperature, and compare the performance change after overclocking.

You can change the voltage, graphics, memory, processor, etc. with this tool. But don’t compromise the system as it may damage your system.

This application is for all those who want to overclock the processor, graphics cards, and system. If you’re going to analyze our system analytics and performance and compare them before and after overclocking, it can do it.

CPU-Z gives you complete detail of your processor, motherboard, and GPU. It means it shows all the information related to your processor like cache levels, voltage, packages, etc.

On the other hand, GPU-Z focuses on the graphics card. NVIDIA, Intel GPU, AMD, and ATI are the compatible names for the CPU-Z and GPU-Z. It monitors temperature, size, memory clock and GPU clocks, etc. 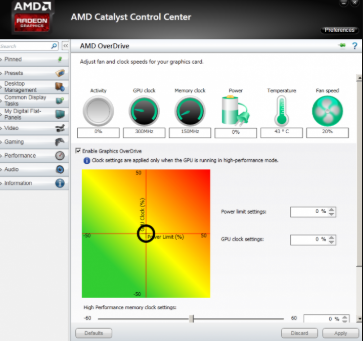 From the name, you might get an idea about the supporting processor. If you guess, then yes, you are right. If your system has an AMD processor, then AMD Overdrive is one of the best overclocking software to use on your pc.

It’s easy to understand interface and user-friendly design make it an accessible, easy interface, and simple design makes it popular overclocking software. Windows users can download it and adjust the real-time overview of CPU, CPU speed, and CPU voltage. You can check the performance of the pc after overclocking. For that, you just have to run the stability test.

Those who are familiar with overclocking, CPU Tweaker is for them. If you are newbie, then skip this name. The experienced people know what this tool does when they click on any of the functions. One limitation of CPU Tweaker is, it is limited with the processor that has memory controllers. Some examples are Intel Core i5, i7, i3, AMD RADEON, etc.

It works best with the processor with memory controllers. If you don’t have it, you can try alternative names like MemSet. This best CPU overclocking software is a powerful and advanced one, but it is not user-friendly. Even some regular users also find it complicated due to its steep learning curve. Despite it is free to use and allows you to learn how to overclock your PC on your own.

This best overclocking software is free. If you have an AMD Graphic Card, it is worth considering to try. It does mean that this tool supports only AMD Graphic Cards. It also supports an extensive range of graphics cards from older Radeon Graphic Cards to Radeon R9 Fury series. It changes the GPU voltage, core GPU clock, memory clock, and other to maximum optimization. And the real-time monitoring feature checks the stability of your system and hardware.

SetFSB overclocking software is a unique tool. It is unique because of its working. It works as the overclocking software and set the Front Side Bus (FSB) of your system. FSB Connects your CPU to the main memory and does some perfect settings to increase the PC’s performance. It will make sure that the settings are done so that your system can reach its maximum limits. It increases FSB speed and improves the performance of your system.

NVIDIA Inspector displays the user’s graphic card information through its application. It is the primary purpose of it, but along with this, this software is widely used to overclock GPU. The app interface is simple, and even for the beginner, it does not seem complex to operate. However, it can’t monitor the stability or temperature of your system. It has its limitations, and hence to overlook it, you have to use anther toll-like 3DMark or HWMonitor with NVIDIA Inspector.

The last name on the list is the ASUS GPU Tweak. It is a relatively simple Windows software on this list. And all thanks to its easy, appealing, and simple user interface with great visuals. With this best GPU overclocking software, you can change GPU voltage, GPU memory clock, and GPU core clock and check the performance.

It is all about 10 Best Overclocking Software and its features. Hopefully, you like it. In case of your question, we are ready to answer. Shoot it!