Are you searching for best Disk Defrag Software? We have shared the best free disk defrag software for Windows 10 which you can use.

Defragmentation turns the reading of your computer’s files into a more efficient process, and thus, makes it easier for your hard drive to access your files faster.

This is where defrag software programs for Windows 10 come in. These programs help improve your computer’s performance.

Here’s a list of the top 10 free disks defrag software programs that you can use on Windows 10:-

Many of the defrag software programs available online aren’t updated often. For example, the free edition of O&O Defrag was updated for the last time back in 2012_ it hasn’t been updated for 8 long years!

Fortunately, Auslogics Disk Defrag is updated quite often, which makes it easier to use this free disk defrag software on Windows 10.

Just like Smart Defrag, Auslogics Disk Defrag can be used to move important and commonly used system files to the faster areas of the drive. This enhances general system performance along with launch times.

It can also exclude specific files and folders from a defragmentation process. The best part is that whether use it commercially or for personal use, it’s free!

However, the free version of Auslogics Disk Defrag can’t be used to defrag during a reboot. You also can’t use it to move custom files to the end of the hard drive. 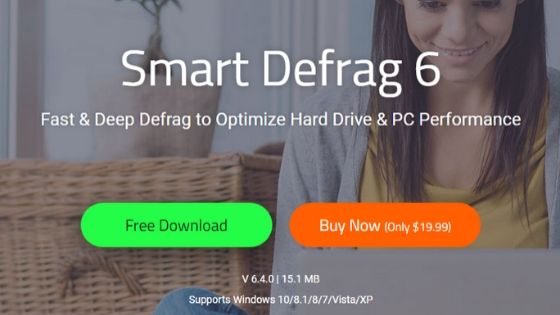 You won’t find many free disks defrag software programs that can run defrags automatically on schedule. But Smart Defrag can!

In order to speed up disk access, it can move files that you use more to the drive’s faster parts, as well as clear junk files and cache files in Internet Explorer and Windows. It doesn’t defrag those files, the size of which is more than that which is specified.

While defragging, Smart Defrag can also exclude certain files and folders from the process, along with replacing the default Windows Disk Defragmenter.

The only drawback is that if your computer is idle, this disk defrags software can’t run a defrag automatically.

Similar to most of the other free disk defrag software programs on this list, Disk Speedup can defrag specific files and folders, apart from entire hard drives.

But what differentiates it from the rest is that even if your computer is idle for a certain number of minutes, Disk Speedup can defrag automatically.

With Disk Speedup, you can move the smaller and more commonly used files to the beginning of the drive so that the unused and larger files are moved to the end of the drive. This improves disk access times.

After a defrag is completed, Disk Speedup automatically turns off your computer. It also comes with a lot of defrag settings, like you can disable defrags for a file that’s larger than 150 MB or is smaller than 10 MB. You can easily customize all these values.

Unfortunately, you can’t use Disk Speedup to defrag removable drives.

Defraggler by CCleaner is arguably one of the best free defrag software programs out there, if not the best. Whether the drive is internal or external, you can use it to defrag the free space in the drive, other than the data.

It even allows you to defrag only particular files or folders and exclude the rest from the defragmentation process.

Before it starts defragging, Defraggler makes sure to empty the Recycle Bin and check a specific drive for errors. During a reboot, it can also run an idle defrag of the Hard Disk Drive.

But that’s not all! Defraggler can also transfer the fragmented files, which you don’t use much, to the end of the drive. This helps speed up access to the disk.

And if you’re using a flash drive, Defraggler comes in a portable version as well.

You can use it to defrag internal as well as removable drives. If you are a more advanced user and you want to customize the program’s work procedure, MyDefrag lets you build your own custom scripts with the help of the online manual.

But if you’re just a beginner, this disk defragmenter may be a bit difficult to use.

Sporting a neat and minimal user interface, the efficiency and speed of GlarySoft Disk Speedup are what make it one of the best defrag software programs.

By optimizing your Windows system, it is designed to enhance the overall general system performance of your PC.

It doesn’t matter whether you’re a beginner or an advanced user_ UltraDefrag has some common features that make it easy for everyone to use. But if you want to make any particular changes to the defrag software program, some advanced options are also available.

Both internal, as well as external hard drives, can be defragged by this disk defrag software.

Apart from defragging individual files and folders, you can use it to check the hard drive for errors.

You can also schedule defrags with UltraDefrag, although it’s tough to turn on such scheduled defrag processes.

Even though it’s the default disk defragmenter windows 10 and other versions of Windows have, it’s one of the best defrag software programs you can use. It lets you defrag both external and internal hard drives, along with running automatic defrags on schedule.

It doesn’t defrag during reboot, though. On Windows 10, click the Control Panel and then Administrative Tools to open the Disk Defragmenter.

Without defragging the entire disk, WinContig defrags specific files quickly. It doesn’t create any installation entries on your PC after defragging, and it’s quite easy to use.

You can’t use Wise Care 365 to schedule defrags, but you can fully optimize, defragment or analyze the drive. It also enables you to scan the drive for junk files.

Once the defragmentation process is complete, it lets you shut down your computer automatically. You can also avail a portable version of this disk defrag program.

This free disk defrag software can be installed to both 64-bit as well as 32-bit versions of Windows 10.